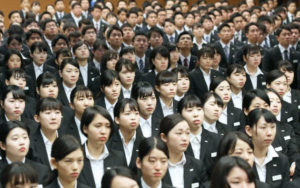 Japanese cosmetics and skincare company Shiseido has topped the 2015 “Companies where women flourish” rankings by the Nikkei Woman magazine.  The metrics used are

Other companies who  have done well include All Nippon Airways (up from #6 to #3), and Mizuho – unlisted previously, and now at #17.  As always, the life insurance companies do well (they traditionally have used a large number of women in their salesforces) as do non-Japanese companies such as IBM Japan (down from #3 to #6), Janssen (previously unlisted, now #13), Eli Lilly (#18, down from #14) and Accenture (previously unlisted, now #20, bumping Hewlett Packard out of the top 20).

The article that accompanies the rankings points out that in some ways Shiseido has become tougher on the women in its workforce.  Previously there had been a big increase in female beauty consultants/shop assistants working “short shifts” so they could balance childcare with work, but now even those on “short shifts” are expected to take their turn to work on Saturdays or work in the evenings.