Yaskawa Electric to integrate robot production within the EU, may close down UK factory 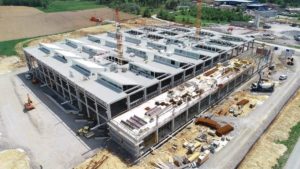 Here’s my rough translation of the article in the Nikkei today (May 14th 2018):

Yaskawa Electric is building a new parts factory in Slovenia and will shift a proportion of parts production from its factory in the UK. The British factory will continue operation for the time being, but Yaskawa will not make any further positive investments and is also considering scaling down or closing down completely. Concerned about the impact of tariffs etc caused by the withdrawal of the UK’s European Union (EU), Yaskawa is integrating its European robot production so it takes place within the EU.

The industrial robot factory in Slovenia will start production this autumn. A parts factory will also be set up in the vicinity so the supply chain is fully within the EU. On 14th (local time), an investment ceremony is to be held with the government of Slovenia.

The current factory is in Scotland, England [Cumbernauld – around 150 employees], producing mainly electrical parts for industrial robots and industrial machinery for the EU. However, with the withdrawal of the EU in the UK, there is concern that procedures such as customs clearance in exporting to Europe will be complicated, in addition to handling tariffs with the EU region, so there is a possibility that it is difficult to maintain the supply network.

As “risk management requires a supply system within the EU” (Yasukawa Electric’s president Hiroshi Ogasawara), production will be shifted to Slovenia’s new factory and no further positive investments will be made in the UK plant.

The new parts factory in Slovenia is around 40,000 square meters, and will start operation around 2020. It will produce electric machinery parts such as servo amplifiers and inverters for supply to Yaskawa’s own industrial robots, as well as external sales.

The factory in Scotland will continue to operate for the time being, but given the launch of the parts factory in Slovenia, Yaskawa will assess the status in terms of the duplication of production items and the supply and demand situation and will decide on whether to scale down or close as an option in the future.

Industrial robots are a field where Japan is highly competitive. Yaskawa Electric is one of the strongest in the world with Fanuc in Japan, KUKA in Germany and ABB in Switzerland. Electrical equipment used for controlling robots is directly related to performance such as accuracy and durability of industrial robots.

For Yaskawa Electric, Europe is the production base for industrial robots as a third region after Japan and China.  KUKA and ABB’s shares of the European market are high, but KUKA is under umbrella of China’s home electronics giant, Midea Group, so the market is shifting. Yaskawa Electric aims to expand its market share by proceeding with its localization.