Hitachi Rail’s CEO Alistair Dormer on Brexit, speeding up and the need to speak simple English 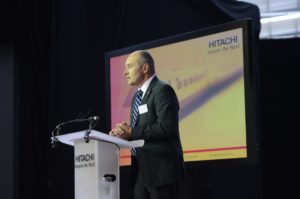 Hitachi’s rail business is only 5% of the whole group’s turnover, but is growing rapidly and moving from being “double domestic” to a truly global business.  Overseas sales are now 83% of turnover, having been 28% of the business in 2012.

Nikkei Business interviewed Alistair Dormer  (subscription only, in Japanese), the CEO of Hitachi Rail who is also a Senior Vice President and Executive Officer of the Hitachi Group about his four years as CEO – at a time when the railway business is undergoing major change, with Siemens and Alstom joining forces in Europe for their rail business.

Dormer talks about the importance of being able to scale multilaterally through M&A, with the acquisition of Ansaldo Breda and other companies, which resulted in acquiring customers across 27 countries – 26% of business is now in the UK, 17% in Japan, 10% in Asia Pacific. Hitachi Rail is also moving, like every technology business, into “solutions” adding a services side, including communication technology, software development, signalling systems and operations.

Speed up every aspect

Dormer says the most important thing for Hitachi Rail as a Japanese company was to speed up every aspect.  “It is a strength of Hitachi as with other Japanese companies that business advances on a consensus basis, carefully harmonizing in-house planning and business negotiations with partners.  This leads to stable quality standards and organizational cohesion, but it is also a weakness in that it takes too much time when you face global competition.  The leader needs to be able to make quick decisions and communicate rapidly.”

Of course this is even more difficult when communication and decisions have to be made across long distances such as between the UK and Japan.  So Dormer decided the best way was to move people around, to raise the frequency and density of communication.  So there has been substantial exchange of people between the factory in Japan and manufacturing bases in UK and Italy.

If there is a substantial geographical and time distance, then people prefer not to have meetings about trivial things, but these details can later become obstacles.  So having more regular interaction is necessary. Hitachi Rail hterefore also has regular video confererence and Dormer himself visits sites, holding meeitngs with 50-80 people to exchange opinions.

Only use simple English

With English as the common language, Dormer (as a native Brit) instituted a rule that only simple English should be used.  “When native English speakers are talking, they speed up.  It should be easy to say, “I don’t understand, I can’t follow what you’re saying”, but it’s difficult to do this in a teleconference or an important meeting.  So then the meeting ends inconclusively and you find out later that people did not understand.  So not only should you use simple English, but also I put in a process to confirm understanding after the meeting. The productivity of our meetings has greatly improved as a result”

Hitachi Rail has also introduced common standards across all countries for HR reviews, cost, engineering performance etc. “Each country, the UK and Italy and Japan, have different cultures and ways of doing things, so we did not force conformity, but respected each others’ cultures while working to Hitachi’s values as the common standard.”

Brexit – nobody knows what the future will hold

With regard to Brexit, Dormer says he is repeatedly asked about it, but at the moment there has been no change.  “Hitachi has good relations with the UK government.  All we can do is continue to ask that companies like us who have their regional base in the UK can continue to access the EU market as seamlessly as possible.  There is no choice but to believe this. A transition period is being discussed, so it’s possible the environment will not change for the foreseeable future.  However it is still a shock to me on a personal level that the UK made such a decision – even when we knew there was nothing to gain from leaving the EU.  There are many people in our offices who were born in the European Union outside the UK, and they are worried.  My priority is to reassure them, but the only thing I can say is that nobody knows what the future will hold.”