Japanese companies and nationals are continuing to come to Europe, but…

Italy and the Netherlands have seen big leaps in the numbers of Japanese companies operating within their borders. Germany continues to dominate, hosting over 1800 Japanese operations, nearly double the next biggest host, the UK.  France is the third largest host, but seems stuck around the 700 mark. 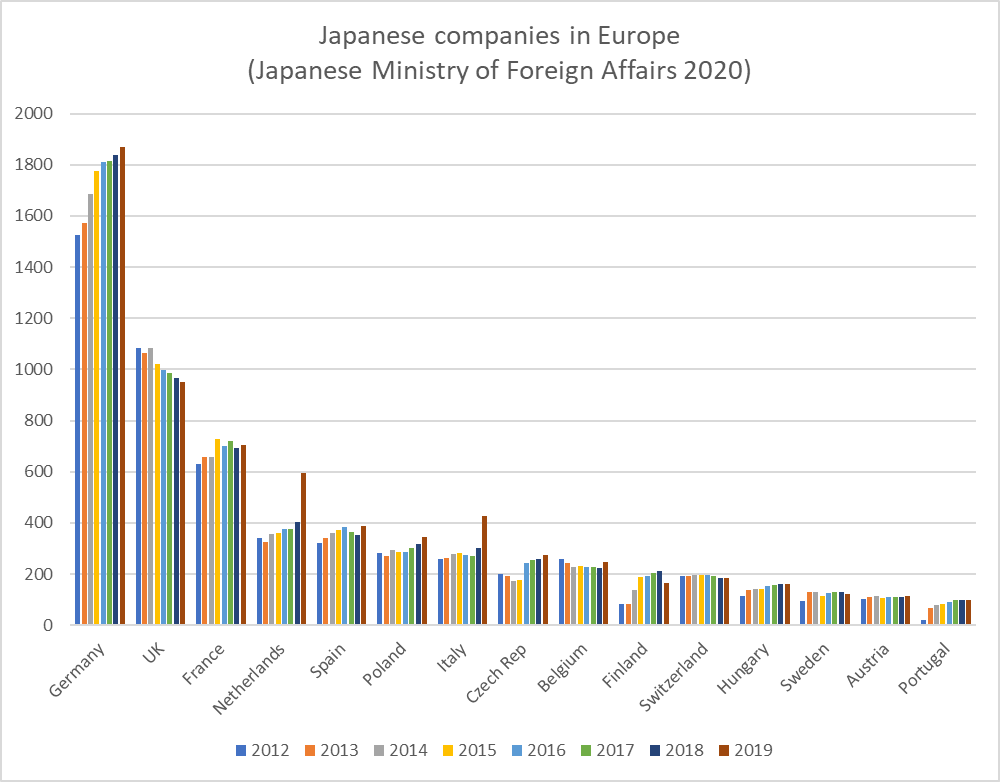 Although they were not released until September 2020, the Ministry of Foreign Affairs (MOFA) figures are for October 2019. However they tally in some ways with the story told by the December 2020 JETRO survey of Japanese companies in Europe which we blogged about here. According to that survey Poland, Germany and Hungary and the Czech Republic are seen as the most promising sales destinations and importing from Japan under the EPA was particularly focused in the Czech Republic, Netherlands, Belgium, Italy and Germany for 2021.  Italy’s 2019 leap may be squashed back down in 2020, as Italy, UK, Sweden, France and Hungary were the countries in which Japanese companies thought their business would shrink. For Italy this may be to do with the impact of the coronavirus epidemic.

The sudden rise in the number of companies and branches owned by Japanese companies may have something to do with Hitachi acquiring various Ansaldo rail businesses from Finmeccanica in Italy. Similarly, MItsubishi Corporation acquired Dutch energy company Eneco, which may have entailed taking on a large number of subsidiaries and branches. It seems clear the Netherlands was the favoured destination for Japanese companies looking to relocate headquarters functions, particularly in services, sales and logistics, as a Brexit back up.

MOFA have also changed the way it compiles statistics on Japanese nationals overseas. Until 2017 the data included categories for permanent residents, intra company transferees, media, entrepreneurs, academics and students etc. But from 2018 the number is only broken down into long term residents and permanent residents.

How students are categorised also seems to have changed, and this has impacted the UK in particular – possibly because the UK itself also changed visa categories recently, particularly how students or trainees studying in the UK for less than a year are treated. For the last available year, 2017, the numbers of students and other academia related Japanese nationals had fallen by nearly 5,000 since a peak of 21,035 in 2014 in the UK. But student numbers had increased over the same period for other European locations and in Australia, New Zealand and Canada, with a small decline in the USA.

The surprise of the 2019 data released by MOFA in October 2020 is that the number of Japanese nationals in the UK has shot up again, after 3 years of decline. In October 2018 there were 60,620 Japanese nationals in the UK but this rose to 66,192 as of October 2019.  As no further detail is provided, it could be that some students and company trainees are now being counted as long term residents again. As the number of Japanese companies has declined, the only other explanation is that 6,000 more Japanese students decided to come to the UK in 2019 compared to the previous three years or so. 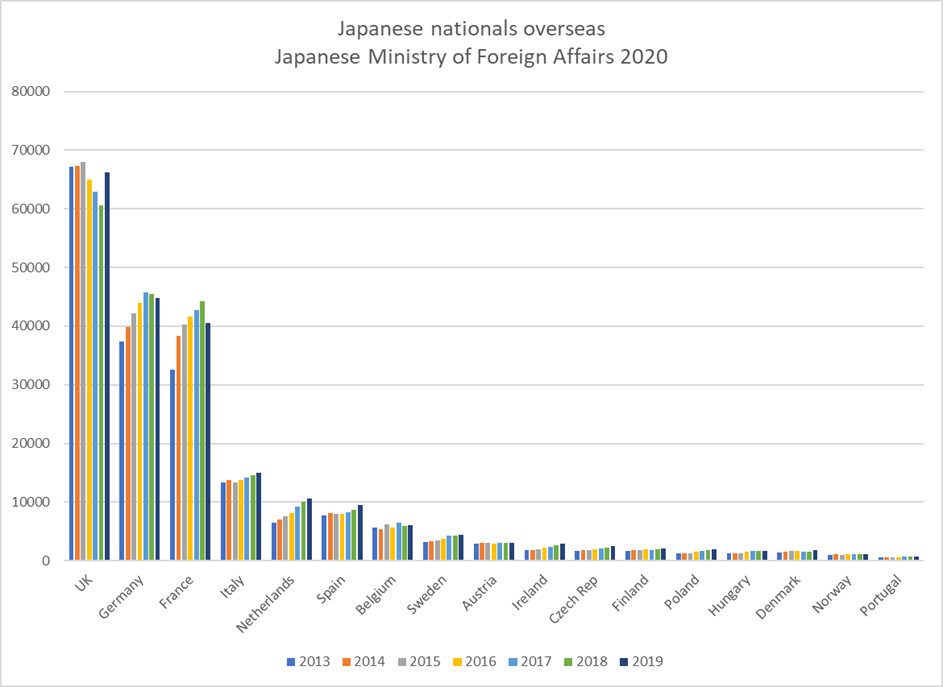