April – a time for cleaning and renewal in Japan and Europe 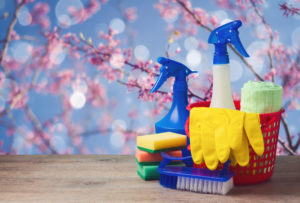 Japanese people living in northern Europe tell me they miss the distinctive four seasons of Japan.  At first this seems a strange thing to say to most Europeans, as we believe we have four distinct seasons too.  But it is true that changes in the season are far less predictable than in Japan, and from autumn through to spring there can be a succession of indistinguishable grey, wet, cold days.

Spring has come earlier than normal this year thanks to an unusually warm winter.  The daffodils and crocuses are already beginning to bloom in the parks where I walk my dog and this weekend my husband and I remarked how busy and energised the town seemed.  Although the end of season sales are still dragging on, the new spring stock is in, with fresh, lighter colours in the window.  The bright sunshine pushed me outdoors to clean the outside of our windows of the winter grime and my husband has nearly finished repainting the kitchen.

Spring cleaning vs the Big Clean

We call this “spring cleaning” in the UK – similar to the Osoji (Big Cleaning) that happens in Japan for the New Year.  We don’t do much cleaning around New Year partly because the days are so short – getting dark by 4pm with the sun rising as late as 8am at the end of December.  Even in the daylight hours it is too gloomy to see the dirt.

Spring is also a time of rebirth and renewal in the Christian calendar.  From February 10th to March 24th this year is a period called Lent, when you are meant to give up vices such as drinking alcohol or smoking or eating favourite foods such as chocolate.  This is a way of remembering the 40 days that Jesus spent fasting in the desert and is supposed to be a spiritual preparation for Easter (the weekend of 26th and 27th March this year), which commemorates the death and resurrection of Jesus.  These dates change from year to year – Easter and Lent in 2017 will be three weeks later than 2016.

Actually the word “Easter” has pre-Christian origins – deriving from an old Germanic word for dawn. According to the 8th century historian, Bede, there was a northern European pagan goddess of dawn, Eostre, whose symbol was a hare or rabbit – which is thought to be why so many Easter decorations feature rabbits.  Another symbol of Easter, the egg, either made from chocolate or painted hen’s eggs, is also pre-Christian, when people gave each other eggs as gifts around the time of the spring equinox.

A time for cleansing and renewal in Japan and Europe

So, while the financial year of April 1st to March 31st is not as universal in Europe as it is in Japan, and our academic year actually starts in September/October, March and April are still a good time to renew and refresh the company.  The rhythms of a cleansing and preparation period in February and March, followed by a new lease of life in April have deep roots in the European psyche.

For everything in Japan there is a season, even neckties

A former colleague of mine, a Japanese man who has been living in London for the past seven years, told me what he most misses about Japan is the distinctive seasons. Of course the UK also has four seasons, but this summer it has been rainy and cold more than usual and we all fear that it will merge seamlessly into the dark, damp days of autumn and winter.

Japan is well-known for its cherry blossom viewing season and anyone who has lived any length of time in Japan will also realise how obsessed most Japanese are about what food is best eaten at which time of year.

This sense of seasonal “rightness” even extends to clothing. I remember once hearing my home stay family debate whether it was too early in the autumn for the father to wear his maple leaf tie.

All this illustrates how being tuned into the seasons is vital to getting the right look and feel to your advertising campaigns and product packaging but there is also a strong commercial rhythm to the Japanese year which should not be ignored.

If you’re thinking about how to time your marketing campaign, there two bonus seasons each year, in summer and just before the New Year, when you’ll notice that advertising for luxury goods suddenly ramps up.

If you’re looking for the right timing for business proposals, it is also worth remembering that most Japanese companies operate on an April 1st to March 31st financial year. April 1st is when new graduates join companies and major reorganisations, promotions and salary changes are implemented. March is therefore a nervous month in most Japanese companies, and not a good time to propose new ideas. A mini-reorganisation is often carried out at the half year point too, on October 1st.

Japanese employees only take about half the holidays they are entitled to and so do not disappear for two weeks to a month in the summer as Europeans do. Still, business meetings in Japan are usually discouraged in July and August. This is partly because some factories close down around the Bon holiday period in mid-August, when people return to their hometowns to visit family graves, but also because the hot and humid weather saps people’s energy.

In September the business trip season starts, climaxing in the attempt to have all payments settled by the calendar year end, in order to start the new year with a clean slate. Unfortunately for those in Europe and North America who are working with Japanese companies, this final push coincides with the Christmas holidays.

The only time when Japan truly shuts down is in the first week of the year, and then another busy period begins, to the end of the financial year, and the annual ‘yosan’ (budget) panic. Then April is taken up with the after-effects of the reorganisations, after which everyone needs the Golden Week holidays at the end of April, through to early May. And so the cycle starts again.