Are Japanese companies leaving the UK because of Brexit yet?

I asked this question just over a year ago and the answer is still yes and no. To which I would add, it’s more a case that Japanese companies aren’t investing in or coming to the UK as much as they used to, replacing the ones that are leaving or downsizing.

Asia continues to dominate as location for Japanese companies overseas 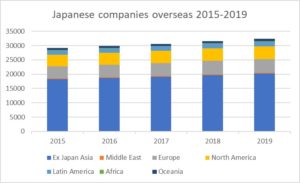 The number of Japanese companies overseas is, according to Toyo Keizai*, continuing to increase – up 65% from 2008, but the rate of increase has been slowing since 2013. The number of Japanese companies overseas grew 2% from 2018 to 2019, with growth in all regions –  higher growth in Africa/Oceania (from a small base) but only 1% growth in Europe compared to 3% in North America and Asia.

The number of UK employees of Japanese companies has fallen for the first time, by 9% 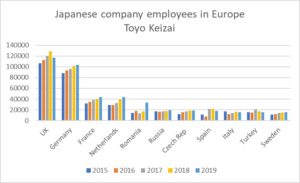 Number of Japanese companies in UK has fallen for first time

It’s hard to work out where Toyo Keizai derives the net drop of 6 Japanese companies in the UK from. Their list of the 7 companies which have closed down in the UK 2019 shows that this was mainly due to reorganization of holding companies or merging of companies rather than full withdrawal from the UK.  Of the 8 new Japanese companies in the UK in 2019, 5 were indirect investments into energy companies by Nippon Koei, a civil engineering company and 2 were indirect investments by WDI, a Hong Kong originated Dim Sum chain which is registered in Japan. 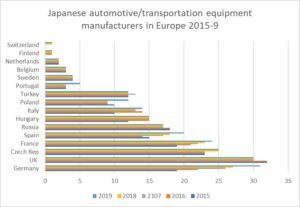 The Japanese automotive sector is of course the sector being most carefully watched for Brexit impact. Japanese automotive manufacturers are continuing to set up overseas – the total number globally has increased 10% in 2019 on 2015.  And “despite” the EU-Japan EPA, 15 more Japanese transportation equipment manufacturers set up in Europe in 2019, a 20% cumulative increase  on 2015.  Of the 15 new companies, 4 are in Germany, 3 in Poland, 2 in Spain, 2 in Portugal, 1 in France, 1 in Italy, 1 in Slovakia and 1 mystery one.  This means Germany now hosts more automotive/transportation equipment companies than the UK – 31 to the UK’s 30.

Japanese acquisitions of UK companies reduced in scale and number

Toyo Keizai’s data is reliant on companies filling in their surveys, so tends to underreport and often misses acquisitions. From my database, I estimate 20 British companies were acquired by Japanese companies in 2019-2020, although some of them were indirect acquisitions through acquiring a parent company with a subsidiary in the UK. Dentsu and Sony continued to acquire UK based companies, and other acquisitions were of British companies in software, gaming, hotels, seafood, recruitment, a manufacturer of drives for electric motors and paper wholesale.  The scale is far less than in previous years, both in terms of numbers of acquisitions and value of the deals.

Even adding these acquisitions in shows a 3% drop in the number of people employed by Japanese companies in the UK from 2018/9 to 2019/20 according to my database – the first drop since I started tracking these numbers in 2015.