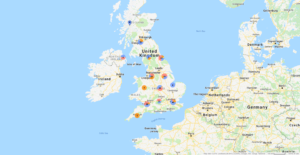 On the face of it, it looks to have been a good couple of years’ for Japanese manufacturers in the UK, despite concerns over Brexit. 214 Japanese companies with production sites in the UK employ around 63,000 people, generating revenues of around £23.8bn. More increased their employee numbers than cut back, and overall employee numbers rose by around 5% on the previous year.

Although there are 214 companies, a handful dominate, and their reactions to Brexit will impact other Japanese companies who are suppliers to them. Nissan, Sony, Honda, Toyota and Princes (a food processor owned by Mitsubishi Corp) account for over 50% of the revenues, and over a quarter of the employees of Japanese manufacturers in the UK.  Increased recruitment by Honda, Nissan and Hitachi Rail (the 6th largest Japanese manufacturer in the UK, which has just started production) and various automotive suppliers account for most of the rise in employment over the past couple of years, whereas Toyota had the biggest reduction in workforce.

It’s clear from the breakdown in sales by region (where given) that the UK is indeed a gateway to Europe for Japanese manufacturers.  More than half of their combined turnover derives from sales to Europe (excluding the UK) and UK sales account for around a third of revenues. Any damage to their ability to export to Europe will therefore impact 50% or more of their revenues.

A third of the 214 companies are involved in the automotive supply chain and their fortunes are tied up in not only what Japanese car makers are doing but also other car makers such as Jaguar Land Rover and PSA (Peugeot, Citroen, Vauxhall etc). Japanese automotive suppliers have been keen to diversify over the past few years, to avoid over reliance on one customer or supplier or geography.

What the car makers do in response to Brexit in the long run is obviously key for them, but there are a couple of shorter term risks. One which has already had an impact is exchange rate volatilty. The cheaper £ can of course be a benefit, if they are exporting, and for most the exchange rate risk is manageable.  As half of the parts in a UK made car are imported, mainly from Europe, and around 80% of cars are exported, again mostly to Europe, there is a natural hedge. Some Japanese UK companies even report in euros, as they are selling and purchasing in euros.

Disruption to the supply chain from Brexit is another risk also mentioned in annual reports.  Although they are mostly manufacturing in the UK for UK based car companies, so should be able to maintain just-in-time delivery even if there is a hard Brexit, Japanese automotive suppliers still have to take account of the whole supply chain and likely reaction of the car manufacturers should there be prolonged problems.

It’s clear some contingency plans are already being enacted.  Japanese companies have been warned since at least 2013 to my knowledge that Brexit could happen, so I suspect many of them have made plans with that in mind. These plans might well be something they would have considered doing anyway, but the added risk of Brexit tipped them towards it.  For example:

Some examples in the non-automotive sector include:

New investment into UK from Japan, but no sign of on-shoring in manufacturing

There are also examples of companies who are expanding in the UK – such as Graphic Controls, Hitachi Rail and various automotive companies, as outlined above.  However I am not seeing a lot of “onshoring” going on, despite encouragement from the UK government and car manufacturers such as Nissan. I estimate there are around 35 Japanese automotive suppliers who do not have production in the UK, but not one of them has started manufacturing in the UK.  There have been no acquisitions or newcomers into the UK in the automotive industry for the past three years.  The new Japan-owned companies that have arrived over that period are mostly in the services (financial, recruitment), food distribution, hi tech or pharma/biotech sector.

A more detailed version of this post is available as a free pdf here.

If you are interested in purchasing a spreadsheet giving full details of the 214 companies, or the 70 companies who might be looking for alternative production locations in the EU (address, ownership/M&A history, European HQ, business sector, European structure, turnover broken down by UK vs Europe, employee figures for past 2 years, constituency and MP), please contact Pernille Rudlin.