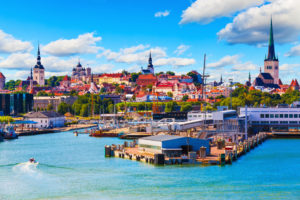 I have been wanting to visit Estonia for a while.  Although it is a tiny country, with only 1.3 million population, I knew from the research that had been done on my family history in the Baltic region that Estonia’s story would help me understand more about the development of Europe and whether there could be such a thing as a European identity or common culture.

So when I had an opportunity to visit the Estonian capital, Tallinn, for a conference recently, I made sure I had plenty of time for sightseeing.   I know Japanese people often think of Europe as having a “stone culture” – buildings built to last, as opposed to buildings made of wood which can be pulled down as needed, and Estonia certainly fits that category, with plenty of beautiful churches and medieval houses built from the local limestone to visit.
However there were other aspects of Estonia which did not fit my usual concept of a European country.  For example, Christianity came very late to Estonia, in the 13th century, a thousand years after it arrived in Western Europe.  It was a pagan country until it was conquered by the Northern Crusades, led by the Christian Kings of Denmark and Sweden and the Germany Livonian and Teutonic military orders (which is where my mother’s family had their roots). To this day Estonia is one of Europe’s least religious countries.

The late arrival of Christianity was partly because Estonia was never occupied by the Romans – unlike most other Western and Southern European countries. Estonia was, however, occupied by other countries for the past 700 years; Sweden, then Russia, then a brief moment of independency in the 1920 and 1930s, then Germany and then most recently by Communist Russia, when it was part of the Soviet Union.

The Russians tried to industrialise what was basically an agricultural and trading economy, setting up factories and mines, bringing in many Russians to work in them. Initially Estonia was seen as a prosperous place to emigrate to but the industrialization was not successful, and the Estonian economy suffered, particularly as its usual trade routes to the West had been cut off.

It was when I wandered around the old merchant houses of Tallinn that I felt I was in a recognisably European environment.  The merchants of Tallinn were part of the Hanseatic League, a confederation of merchants and towns that stretched across many countries of Northern Europe, from the UK to Russia from the 13th to the 17th centuries.

Even now, with the rise of anti-European movements in the UK and the Netherlands, most people would want to stay in some kind of trade federation.  The region’s history of trading and shipping, travelling and migrating around Europe and a love of doing deals with each other is still very strong.  It’s an identity nobody in Europe wants to lose.