Balkanizing Europe – in a good way 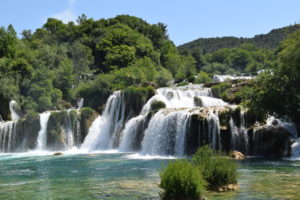 On the way to the stunning Krka waterfalls in Croatia, from where we staying on the Adriatic coast for our holidays last summer, our tour guide suddenly said “we are now in the Balkan part of Croatia”.  The term Balkan has many resonances for Europeans who know their history.  Not only is it 20 years since the war in the Balkan peninsular, but it is 100 years since WWI, which was thought to partly have been the result of “Balkanization”, whereby the countries, formerly ruled by the Ottoman Empire or the Austro-Hungarian empire, fragmented into warring states.  Clearly our guide wanted us to appreciate that Croatia was not just Balkan, but also Mediterranean, and therefore part of modern Europe.

The warring Balkan states were in part reunified under the Soviet Union after WWII and most Western Europeans of my generation remember the Adriatic coast as being part of Yugoslavia, and a cheap but pleasant place to go on holiday.  Yugoslavia was meant to be one of the more benign and successful Soviet satellite countries, so it was a shock to Western Europeans when it collapsed into a bloody civil war.

Croatia became the most recent member to join the European Union, in 2013.  Other Balkan countries such as Former Yugoslav Republic of Macedonia, Serbia and Montenegro are official candidate countries, with Bosnia and Herzegovina being considered a “potential candidate”.

With the European Union in danger of falling apart itself, thanks to the Eurozone crisis and the UK referendum on exiting, the Balkan candidate countries must wonder what exactly the benefit of joining the EU might be. For them, the original aim of the European Union, to prevent outbreaks of further wars through economic cooperation, still has meaning, of course, given their recent history.

The benefits of economic cooperation are less obvious. It is clear from Croatia’s recent accession that joining the EU later on means missing out on the big regional business investments by multinationals.  Balkan state populations and economies are relatively small, so there is not much incentive to invest substantially in opening a subsidiary in such countries – the markets could probably be easily covered through a local agent, or from a regional base in Germany or Poland.

Croatia still has a shipbuilding industry, representing 10% of its exports but clearly it has had to concede that a major economic driver is going to be tourism, as it was in the past.  I saw plenty of Japanese tour groups there, and I expect, like us, they were impressed by the beauty and history of Croatia’s old towns, the delicious seafood and how clean and well looked after the streets and buildings were.

Above all what really struck me was the hardworking, efficient, polite, honest, well educated, excellent English ability and cheerful nature of all the Croatians we met.  Although the Croatian market may not be attractive to foreign investment, the Croatian workforce certainly is.

I only hope that Europe can work towards a future where Balkanization has a new meaning – that people from the Balkans contribute to and benefit from the European single market – and not the old definition of a disintegration into hostile, ethnically cleansed states, yet again leading to the kind of war that the European Union was meant to prevent from ever happening again.

This article first appeared in Japanese in the Teikoku Databank News