Germany has historically been the main rival to the UK in Europe for Japanese investment.  The UK absorbs about 40% of total Japanese investment into the EU but according to the Japanese Ministry of Foreign Affairs, there are actually 50% more Japan originated companies (703) in Germany compared to the UK (471).*

More Japanese employers in Germany but fewer employees than UK

This may be because the big employers – Japanese car manufacturers – do not have production in Germany – unlike the UK with Nissan, Honda and Toyota. There are plenty of Japanese automotive component manufacturers in Germany, but they tend to be what is known in German as “Mittelstand” or medium sized companies.

Manufacturing represents around 20% of German GDP, similar to Japan. Germany has of course always had a strong reputation for engineering and German cultural values such as risk aversion and process orientation fit well with Japanese corporate mindsets.

By contrast, only 11% of the UK’s GDP is derived from manufacturing and 80% of UK GDP is services, particularly financial services such as banking and insurance. This sector accounts for quite a few of the Japanese companies who have multiple subsidiaries in the UK, as well as trading companies, holding companies and services companies providing financing and other functions across Europe.

This might explain why UK has more Japanese residents than Germany – presumably acting as liaison and coordinators with Japan HQ for the region – around 63,000 compared to 46,000 in Germany.  However, this number is falling for the UK, and increasing for Germany.

Does this mean that the UK is losing its role as the services centre for the region to Germany? Looking at the detail, it seems the main factor behind the drop in the number of Japanese in the UK is that there are 3,000 fewer Japanese students and academics in the UK compared to a year ago.**

Intra company transferees to the UK fell by 1% from 2015 to 2017 whereas there are now many hundreds more Japanese transferees living in Germany, the Netherlands and Eastern Europe than three years’ ago.

As Japanese manufacturing shifts eastwards in Europe, sales hubs are moving with them

Looking at the recent investments into the UK and Germany, the trends of the past few years still seem to hold. Investments into the UK are in the form of establishing regional holding companies, or M&A in biotech, information technology and services for the UK market such as car parking.   Investments into Germany are mainly for the wholesale of electronic components and machinery.  Sometimes these are German sales offices for Japanese companies who already have sales or manufacturing in the UK.  As manufacturing shifts eastward in Europe, so the sales hubs are moving with them.

The above article was written for the Teikoku Databank News in October of 2018.  Since then, the Ministry of Foreign Affairs has published further data on Japanese nationals resident in Europe and Japanese companies operating in Europe, but unfortunately without the level of detail that was available previously. 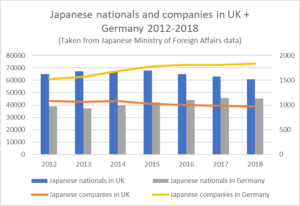 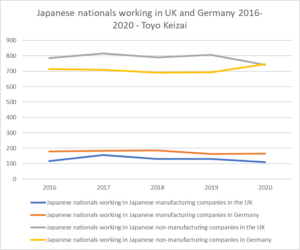 *This is the number of individual incorporated companies in 2018 – if you include all branches, and multiple subsidiaries, the figure is 966 Japanese entities in the UK compared to 1,839 in Germany as of Oct 2018 MOFA report

** Based on later conversations with the British Council, this steep drop in Japanese students coming to the UK may well be to do with changes in visa categories that are being monitored rather than an actual decline – most Japanese students prefer to study abroad for less than a year.

The original version of this article can be found in  “Shinrai: Japanese Corporate Integrity in a Disintegrating Europe” available as a paperback and Kindle ebook on  Amazon.