Poland, migration and the future of the EU 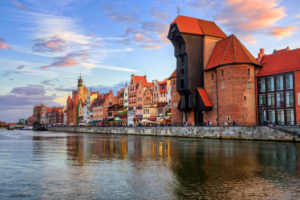 It has just been announced that Polish immigrants now represent the largest group of foreigners living in the UK. There were around 831,000 Polish born residents in the UK in 2015, overtaking Indian born residents.  This represents a ¾ million increase on 2004 when Poland joined the EU, showing the scale and speed of the increase in immigrants from Eastern Europe – one of the root causes of the British vote to leave the EU.

Poland’s connections to the UK go back further than this, however.  A large group of Poles settled in the UK after WWII, and were welcomed because of the well-known heroism of Polish pilots who flew in the Battle of Britain.

Trading links with Poland date back even further, to medieval times and the Hanseatic League of merchants who did business with each other from Russia through the Baltics to Germany, the Low Countries and into the UK.

But it would be wrong to think of this as a European Union style alliance of nation states.  League membership was by city.  Many of the European countries as we know them now did not exist then. Member cities such as Gdansk or the Hanse capital of Luebeck were semi-autonomous, or controlled by the Holy Roman Empire, or Prussia, or Denmark.  And of course more recently the eastern part was under the domain of Soviet communism.

If you visit Gdansk now, the old part of the city is in fact a beautiful, partly imaginary, post-war reconstruction of a pre-Germanic past.  The actual old city had been obliterated by WWII.  Also worth a visit is the European Solidarity Centre which commemorates the Gdansk shipyard union Solidarnosc and asserts that its strike in 1980/1 started the process which culminated in the Berlin Wall coming down in 1989.

British people who are sceptical about the European Union say it should only be about trade, and that they want control back of UK borders, money and laws.  For other EU members, the EU was a way of regaining control of their lives, by ensuring peace and democracy. This aim was not so appealing to the UK, who had no such recent experience of ground wars, dictatorships or being occupied by other countries.

Many people and political leaders in other EU member countries – including Poland – are beginning to say the EU represents a threat to their national sovereignty too. Border controls are being reinstated and there is a strong possibility eventually the EU itself will disintegrate.

Polish residents in the UK are worrying what will happen to them post Brexit and the millions of British who live elsewhere in the EU are also nervous for their future.

Many of the people working for Japanese companies in the EU are migrants, so I think the best thing Japanese companies can do right now is reassure them that they will look after them, and if necessary offer relocation to subsidiaries in other countries, including Japan.