Trump brings back teenage memories – for me and other Europeans 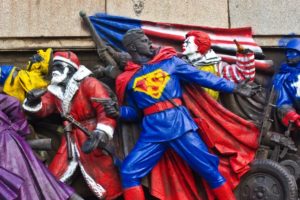 For people of my age, the election of Donald Trump has brought back memories of when Ronald Reagan was elected, thirty five years’ ago.  I remember, as a teenager, the British pop songs and TV programmes that mocked Americans for electing Reagan – a seemingly dumb, war mongering, B movie actor.

I lived in Pennsylvania for half a year just before Reagan’s election, and attended an American high school.  It was a formative experience for me, to see for myself the land of opportunity, where everything seemed new, energetic and plentiful, compared to the recession, high unemployment and riots back in the UK.

Most Europeans, not just the British, have these similarly mixed feelings about the US and the American people – of admiration, resentment and fear.  My parents and grandparents remember the American GIs who were stationed in Europe – to whom they were both grateful for helping liberate Europe – but also resentful of how much wealthier and better fed they seemed than the rest of the population.

I suspect many Japanese people also share these feelings and memories.  However, the American influence on Japan is even stronger, thanks to the long post war occupation, the continuing influence of American popular culture, and the fact that the English taught in Japanese schools is American English.

There is a tendency therefore in Japan for those who do not know other Western cultures, to think that the American communication style will work everywhere. But Europeans are very sensitive to anything that Japanese companies do which seems too obviously American.  If Japanese companies try to manage their overseas operations via their US subsidiaries, resentments rapidly build up in Europe about the top-down, highly controlling American management style.

Japanese expatriates who arrive in Europe after experience in the US become frustrated, because the American “just do it” approach to directing subordinates does not work.  It is not as easy to fire people for incompetence or unwillingness to follow direction in Europe as it is in the USA.  Europeans expect to be consulted about their work and think it is important to raise objections or point out problems to their bosses if there are justifiable concerns.

Even written materials which are too obviously American can cause resistance.  Twice now I have been told by clients that they did not want to roll out e-learning and manuals which had been developed in Japan, using American style English and tone.

American companies are good at persuading Japanese customers that the American way is the globally accepted international standard way and that is true to some extent.  However, the best solution, which we also use at Japan Intercultural Consulting for our training, is to have American core material – so that our customers get the same basic approach around the world –  but allow a great deal of customisation to suit the tastes of specific countries.

Getting this balance right is not easy, but if the effort is not made, stubborn European resistance and rejection will result.