Trends in Japan owned financial services companies in the UK

Around 14,000 people worked for 85 Japan owned financial services companies in the UK in 2021. This is around 1,000 more people than in 2016, the year of the Brexit referendum. Although all the main banking, securities and insurance groups (Mizuho, MUFG, MS&AD, Nomura and SMFG) opened or strengthened EU entities as a Brexit countermeasure, it does not seem as if large numbers of jobs have shifted to those entities, or that there have been layoffs in the UK, and large scale hiring in the EU.

The surface calm does mask some restructuring, however, which are difficult to detect in the case of MUFG and Mizuho, as their banks in London are run as branches (of the Netherlands European HQ in MUFG’s case, and of Tokyo HQ in Mizuho’s case), and therefore do not have to publish company accounts with official employee figures.  It was reported that MUFG offered 500 directors redundancy packages in 2019, but at the same time, subsidiaries such as Mitsubishi HC Capital and MUFG Securities have been growing substantially, with further employees added to the group through the acquisition of First Sentier Investments.

Rival banking group SMBC has incorporated its subsidiaries in the UK and its European headquarters is in London, so more accurate figures are available, which show employee numbers at the bank have grown by 45% to 1,246 from 2016 to 2021.

Nomura International on the other hand has 29% fewer employees in 2021 than it did in 2016, but a recent hiring spree has brought its London employee total back up to over 2,000 according to its annual report released in 2022. The Daiwa group has also grown, particularly on the corporate advisory side.

Recent growth in employee numbers has been more organic than through M&A. The only acquisition since MUFG acquired the Australian investment firm (with substantial presence in the UK) First Sentier in 2019 has been Orix acquiring Gravis Capital Management and SBI acquiring B2C2, a cryptocurrency firm employing 46 people.

Closures in the past 4 years include Finatext UK, Spitalgate Dealer Services (which was providing financing for Mitsubishi car dealers), Speedloan Finance – a pawnbrokers acquired by Daikokuya in 2015 and the branch offices of Okasan Securities and the Bank of Yokohama.

It may be that the apparent stability of Japanese companies in the UK was partly the result of a delay to relocations to the EU caused by the pandemic, and that further friction with the EU may lead to pressure being brought up on financial services companies to shift more of their business to the Continent. A further factor is the extent to which London is still seen as the place to learn about and develop the new business areas which Japanese financial services companies are investing in. 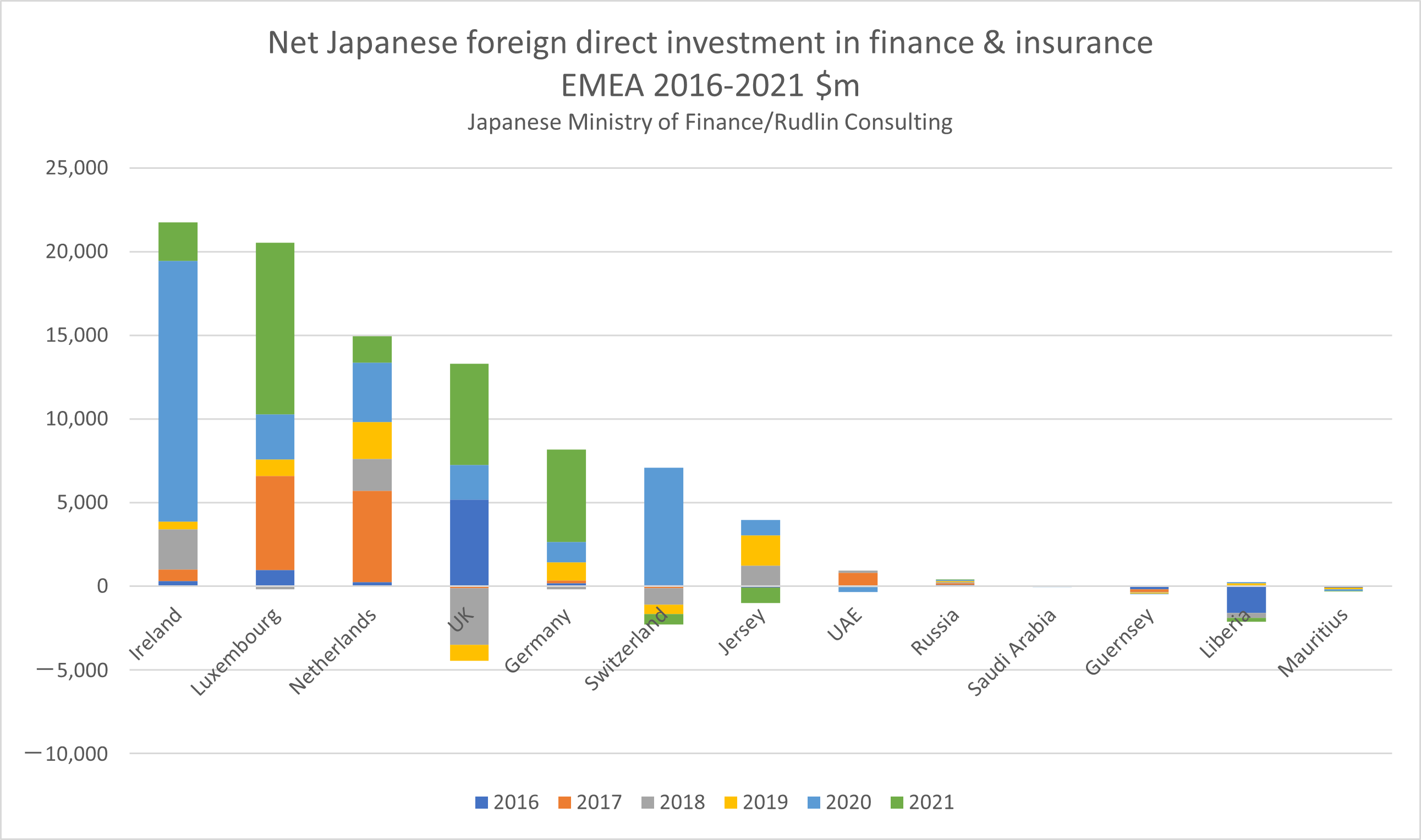 A directory of 85 Japan owned financial services companies, giving their full names, parent company, type of business and latest number of employees is available for £10 + VAT. Please contact us for an invoice and payment details via PayPal.