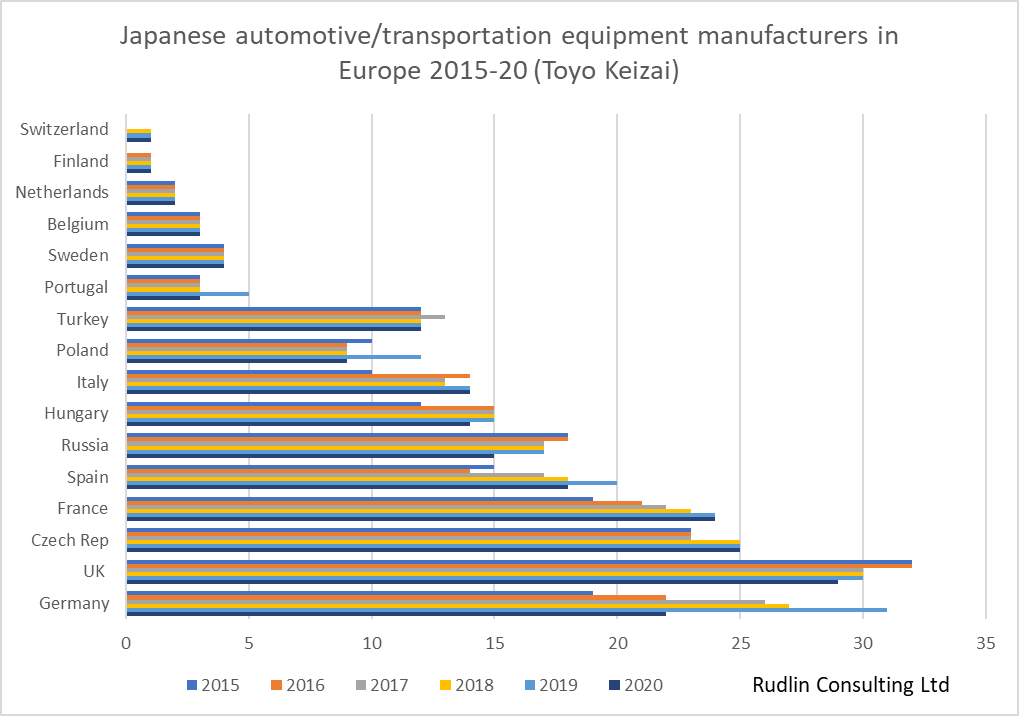 The recent news about Nissan and its Chinese battery manufacturing partner Envision deciding to go ahead with expanding the battery plant in Sunderland, to supply a new electric vehicle model, led me to revisit my researches on trends on the Japanese automotive sector in the Europe, Middle East and Africa region. I had blogged in October 2020 that for the first time in at least five years, according to Toyo Keizai data, there were more Japanese automotive manufacturers in Germany than in the UK.

Toyo Keizai’s new directory came out this April, and adding in their more recent data, it seems that the number of Japanese automotive manufacturers in Germany actually dropped by 11, from 31 to 22. So the UK is back in the top spot. Cross checking this against all data for Japanese companies in Germany, it seems that this is more that those 11 companies switched categories rather than left Germany. Many automotive suppliers of parts supply parts for other industries, so they may have decided that the bulk of their business was no longer automotive, or preferred not to be classified as automotive.  There were also falls in the numbers of Japanese automotive manufacturers in Spain, Russia, Poland and Portugal.

The number of people employed by Japanese automotive manufacturers is perhaps a better indicator of general health than self classified numbers of companies. The numbers employed by Japanese automotive manufacturers in the UK has dropped by 12% comparing 2015/6 to 2020/21 and by around 8% over the year 2019/20 to 2020/2021.  I only have comparable employee numbers for the rest of the region for the past two years,  and these show that there has been a 2% drop employee numbers from 2019/20 to 2020/2021. The only other notable decrease was in France, where employment fell by 11%. The most growth was in Morocco, but only by 3%. 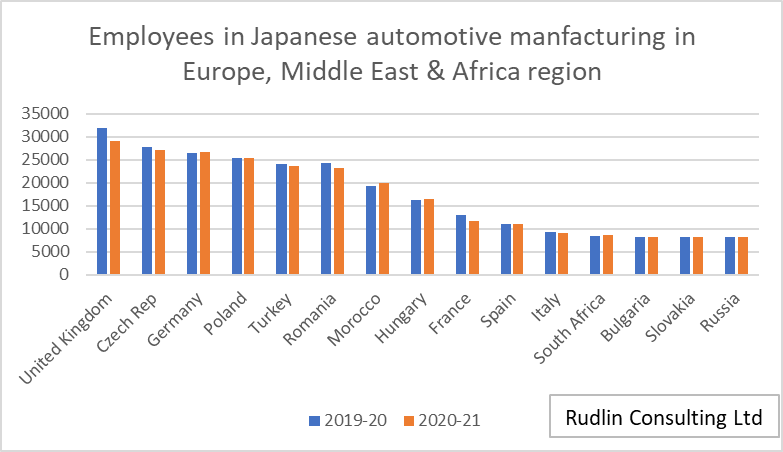 So the UK still has the most employees of Japanese automotive manufacturers in the region, but the number of employees has dropped below 30,000 for the first time in five years. The Czech Republic, Germany and Poland are not far behind in terms of employee numbers, and it’s possible Germany still does have more Japanese automotive related manufacturers than the UK, it’s just that they have chosen not to classify themselves as being in the automotive sector. The closure of Honda Swindon and other suppliers to the Swindon plant this month will probably result in the UK losing its top spot both in terms of employees and companies hosted.

The biggest Japanese automotive employers, apart from the actual car assemblers themselves, are the wire harness suppliers- Yazaki and Sumitomo Electric being the dominant Japan owned companies. Unsurprisingly, they base most of their factories in lower labour cost countries in Eastern Europe and North Africa.

Overall, Japanese automotive manufacturers employ around 280,000 people in the region, not including those in the supply chain who are wholesale/importing rather than manufacturing.  So it is no wonder that any investment by them is welcome news, but it may take a little more than the recent Nissan announcement to reverse the trends in the UK and across the region.