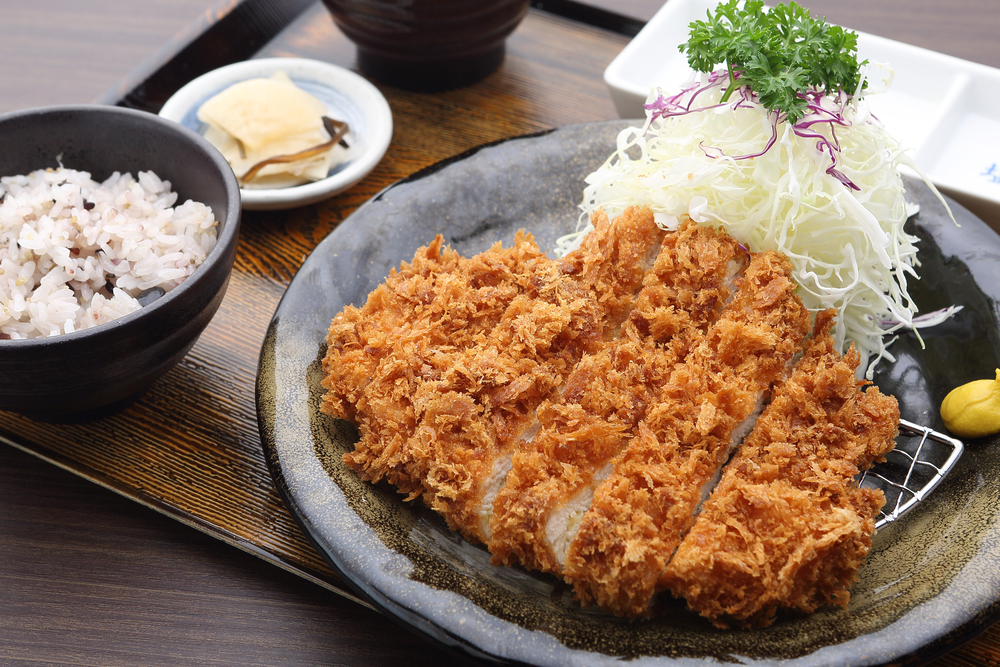 Although tonkatsu is now viewed as a typical Japanese dish, in Japan it was originally a yoshoku “Western Style” dish, introduced into Japan in the 19th century, when Japan began to open itself to foreign influence and trade again.  Japan had cut itself off for the best part of three hundred years, with no foreigner able to enter or any Japanese leave the country under pain of death.

This law was put in place by the Tokugawa shoguns in the 17thc, to end the colonial and religious influence of Spain and Portugal and also to help the Shogun to gain more control over the foreign trading of other feudal lords, preventing them from building up military strength.

Trade did not cease entirely during this time – it was just heavily controlled – with Dutch and Chinese merchants being allowed to live on an artificial island off the coast of Nagasaki.  Western scientific ideas also trickled into Japan, but largely undercover.

Consequently, when the Americans finally forced Japan open in the 19th century, the Japanese found themselves far behind in military strength, still using matchlock guns from the 16th century.  Japan had also missed out on the industrial revolution, but quickly caught up, sending many of its brightest and best to Europe and the US to study technological developments, and bringing foreign experts back to work in Japan.

Post war Japan offers a more modern day insight into what happens if a trading nation like, oh, let’s say the UK, chooses to shut its borders to migration (98% of the Japanese population are of Japanese nationality) but tries to export as much as possible to the rest of the world.  Initially, Japan won through with cheap, increasingly well-made products.  As the pound is already falling with the threat of Brexit, presumably there will initially be some positive impact in terms of British exports becoming cheaper.  Imports will however be correspondingly more expensive.

If houses prices weaken and the FTSE falls post Brexit, because of foreign investment pulling out of UK assets, then we might be faced with an asset price crash similar to when Japan’s economic bubble burst in 1990.  In the years after, a large number of basic manufacturing jobs in Japan went offshore, to Asia.  After a decade or so of deflation and low growth, some higher end manufacturing moved back, but factories are far more heavily automated, and robot driven than before.

Even though the UK is increasingly exporting more services than manufactured products, the same offshoring and automation threats will apply.  In fact, we are already seeing this happening – recently HSBC announced that 840 IT back office jobs will be moved out of London to Poland and China and RBS have also announced similar reorganisations.

Other jobs which cannot be offshored (for example, warehousing, food harvesting and processing) – which were being done by immigrants – are also threatened by automation.  My old employer Fujitsu has been pioneering an agriculture “cloud” which uses supercomputing and Big Data to allow elderly farmers to capture and automate their knowledge on when to sow, fertilise or harvest.

Where automation is impossible, Japan has also let occasional groups of immigrants in to do what are known as the 3 K jobs – Kitanai (dirty), Kitsui (hard) and Kiken (dangerous), such as in construction and nursing.

It’s possible British employers will also improve wages and conditions to attract indigenous British employees to our 3K jobs.  However, as we are quite close to full employment already, this will in turn push prices up (and as noted, prices of imports are likely to rise too), so overall, people will not feel better off.

Japan used to be very expensive, but the 20-year stagnation has resulted in deflation, with 40% of its workforce in badly paid, insecure jobs and the other 60% with the secure jobs have seen their take home pay fall in real terms, despite deflation.

Innovation should be the way out, but actually Japan has a nickname for innovations that only sell well in Japan, because they were designed by Japanese for Japanese – the Galapagos syndrome – after the isolated islands where flora and fauna developed to fit local conditions, but die in the world outside.

*if anyone wants to take up this idea, I’d be delighted to act as advisor, for equity and a lifetime supply of meal vouchers (however, if the UK leaves the EU, starting in the Netherlands or Denmark might be preferable)