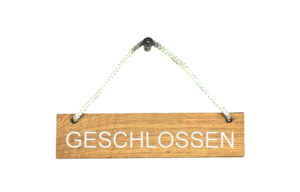 You can’t have German workstyles and Japanese customer convenience, says Shion Amemiya, a 26 year old Japanese woman who has been living and working in Germany for 4 years and has now written a book about it.  The book hits a nerve in Japan because of the pressure companies are under to reform their workplace cultures and cut back on overtime.  Germany is often pointed to as an example of a thriving economy where people don’t do overtime and take plenty of holidays.

Germany has one of the highest overtime rates in the EU, she says in an article in the Toyo Keizai. Actually, looking at Eurostat’s 2018 figures, the UK has the highest number of hours worked per week per full time worker and Germany is somewhere in the middle.

She points out that Germans will do overtime, if there is work that needs to be finished, although there are more Germans who will stick to their rights and leave on time regardless then there are in Japan.  But as she notes, those kinds of people will not be well evaluated by bosses or colleagues.

Overtime is worked in order to finish a job, and there is a lot less “face time” overtime in Germany than in Japan.  Also, if overtime is worked on one day, Germans will then work fewer hours to compensate for this the next day, she observes.

As for holidays – she says what is great for the holiday taker is not so wonderful for the end user. She notes how in the summer, offices are empty, but that also meant that the local government officials, dentists and doctors she wanted appointments with were also away on holiday, and her favourite cafe was shut. Often, the person away is the person in charge, and nobody else can take care of their work while they are gone, and you are told to wait a month.

In Japan customers will insist on the person in charge being contacted even if they are on holiday, but in Germany she notes, customers and suppliers are seen as equals, with mutual rights – “I take a holiday, so I must accommodate other people taking holidays.”

Because people don’t take much holiday in Japan, it is a convenient country – shops are always open, the person in charge is always available.  Just copying another country without realising the drawbacks is pointless.  Japan needs to come up with workstyle changes that are appropriate to Japan, she concludes.