Japanese manufacturing in the UK – resilient, but not growing

Excluding automotive production, Japanese manufacturing operations in the UK have been relatively stable since 2015/6.  Out of 200 or so companies, only a handful of companies have closed in the past five years, and much of this was to do with consolidating operations rather than withdrawing entirely from the UK.  Many of the Japanese manufacturers date back to the 1970s, and the oldest established, YKK, has been manufacturing in the UK since 1966.

There have not been many new entrants either over the past five years – apart from Mechatronics (owned by JTEKT) and other “new” entrants which are the UK subsidiaries of American or Swiss operations acquired by Japanese companies such as Stolle (acquired by Toyo Seikan), Hitachi Energy (was ABB Power Grids) and Avista (acquired by Kurita)

Around two-thirds of the companies in this sector are the product of, or have conducted M&A in the UK. Japanese M&A activity across the UK and Europe has dwindled away in recent years, perhaps because of the difficulty of doing due diligence in a pandemic, or Brexit making acquisition of a UK manufacturing operation that may be part of an EU supply chain less attractive.  There does not seem to be any particular trend to acquisitions in the UK, other than clusters of purchases in packaging, agrochemicals and food processing.

Around 39,500 people were employed in the UK by non automotive Japanese manufacturers in 2015/6 and after a few years of growth to around 42,000, this fell to 39,167 in 2020/21. Judging by the results of the 60 or so companies who have reported for 2021/22, this downward trend is continuing. If automotive manufacturing employment is added back in, there were around 60,600 people employed in Japan-owned manufacturing in the UK in 2020/21, almost the same as were employed in 2015/6. As we explained elsewhere, this number is likely to fall in 2021/22 with the closure of Honda Swindon and other suppliers to Honda. 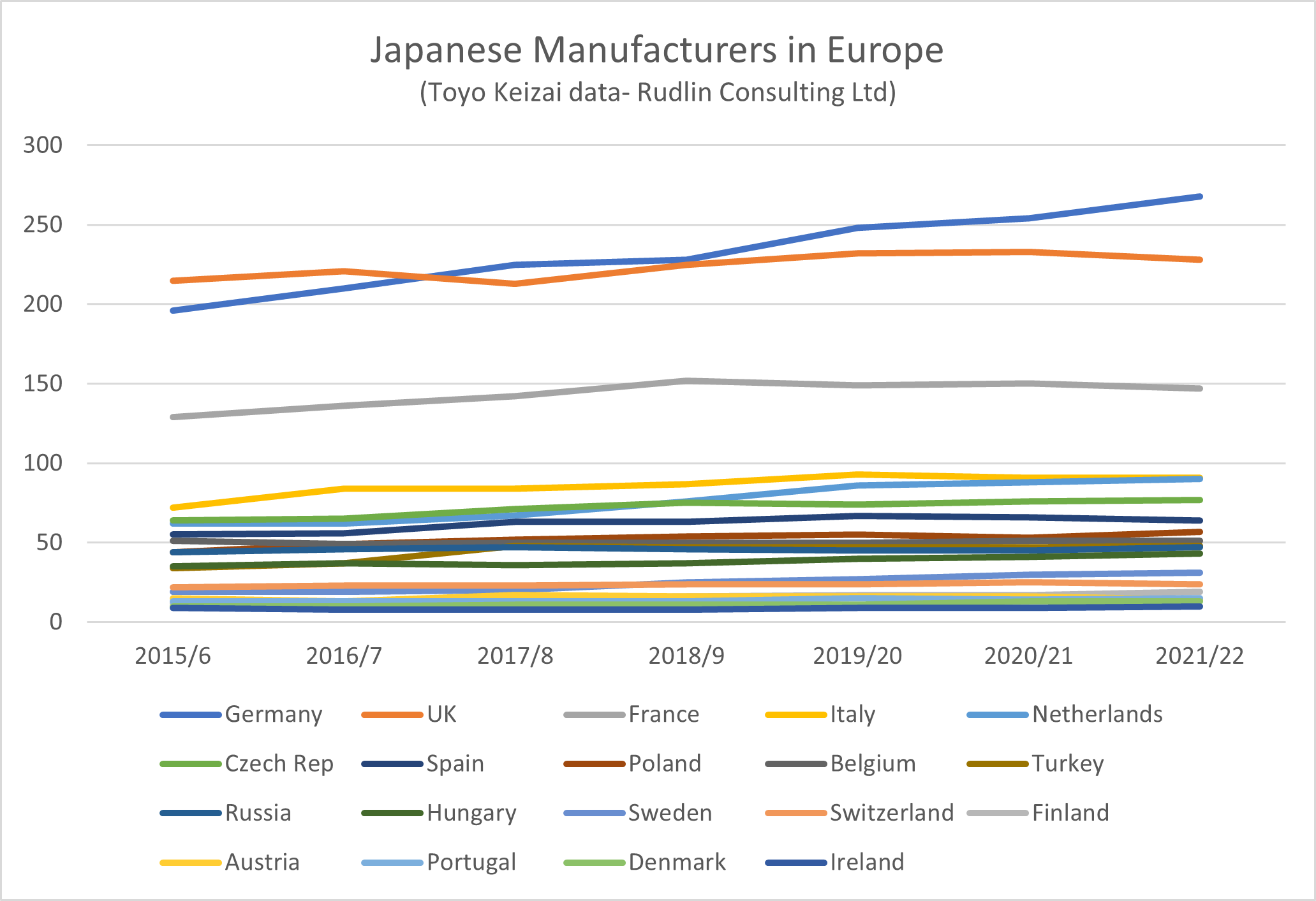 How this compares with other European countries can be seen in the chart on the left – which shows the numbers of all manufacturing companies in Europe, including automotive. According to Toyo Keizai, the number of Japanese manufacturers in the UK dipped around 2017/8, but recovered, with another more recent fall. But there was growth overall since 2015/6, with 228 companies in 2021/2 compared to 215 in 2015/6  – a 6% increase.  This is much lower than the overall 20% growth in Europe, and as a consequence the UK is no longer the largest host of Japanese manufacturers.

The number of Japanese manufacturers in Germany has grown 35%, and growth is continuing, widening the gap with the UK. France is a clear third, and is showing signs of growth tailing off. Netherlands, Turkey, Poland and Nordic countries are showing higher than average growth as hosts.

Japanese manufacturing in the UK “despite” Brexit has remained stable thanks to the resilience built up by those companies through being long established in the UK, benefitting from Japan HQ risk aversion and long term planning and having experienced, local management.  These factors have not attracted the growth seen in other countries in Europe, however.

A directory of 205 Japan owned companies with production facilities in the UK, giving their full names, parent company, type of business and latest number of employees is available for £20 + VAT. Please contact us for an invoice and payment details via PayPal.