Around a half of the 1,100 or so Japanese companies in the UK have filed their annual reports for the financial year 2021/2. Most paint a positive picture of recovery from the pandemic and resilience to any impact from Brexit. However, the employee totals show a more worrying trend emerging. 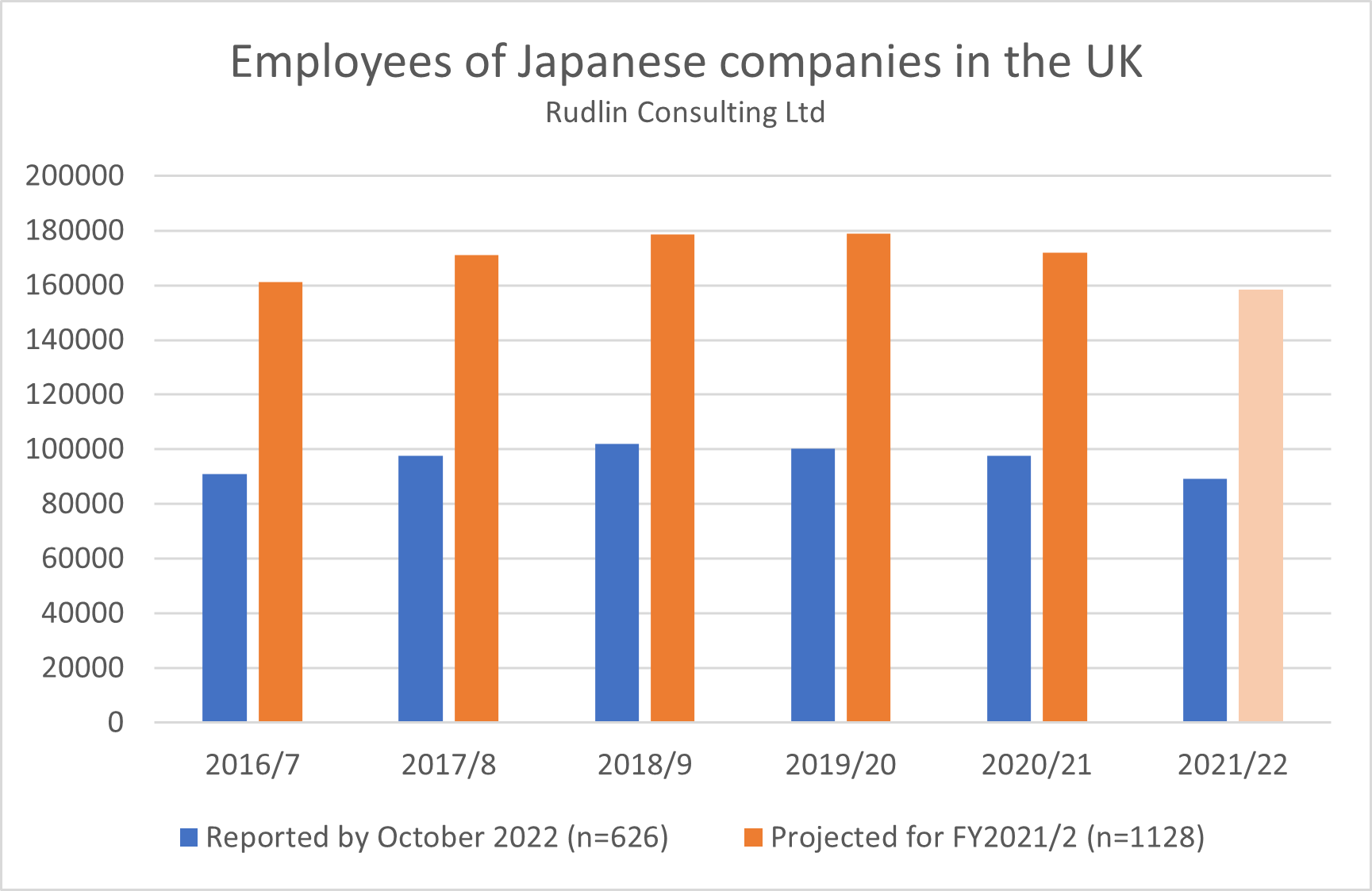 A number of factors might be behind this rise to 2018/9, followed by a fall, and more recently a sharp fall. It could be that Japanese companies continued to invest in growing their UK businesses, until the likely Brexit deal became clearer towards the end of 2019, and then the impact of Brexit played out after 31 January 2020 through to when the transition arrangements ended on December 31 2020.

It could also be that Japanese companies laid off people during the pandemic (although the decline in employment started before early 2020 in some sectors) and then were hit further by the Great Resignation in the past year. 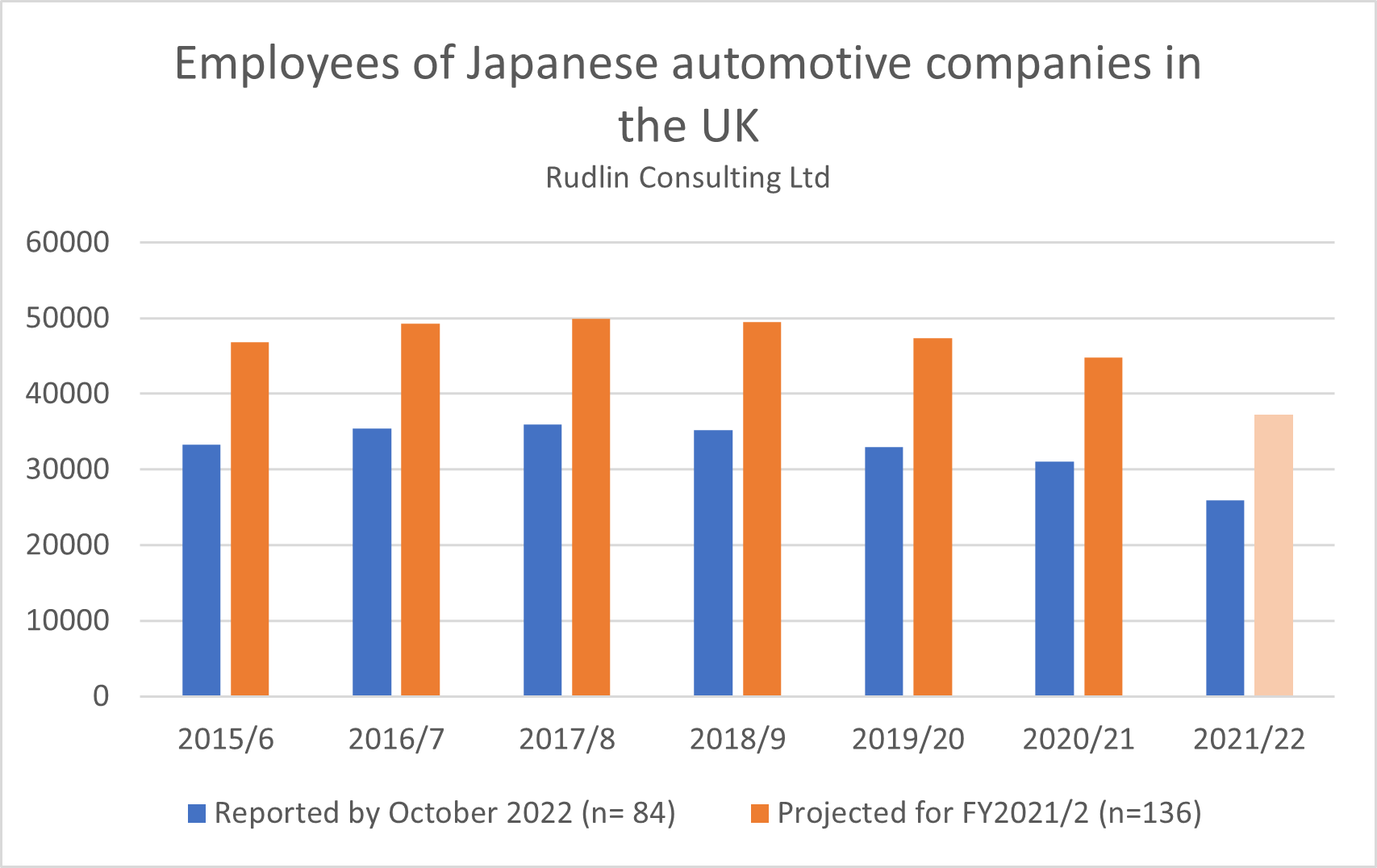 It is certainly partly due to the impact of Honda closing its Swindon factory in July 2021. That meant the loss of nearly 3,000 jobs and it looks likely a further 5,000 jobs will have been lost in the automotive sector over the past year – many of which were dependent on Honda.  The decline in employment in the automotive sector began in 2018/9, a year or two before other sectors began to lose jobs.

So what about the 6,000 jobs that look to be disappearing in other sectors?  Finance seems to have stayed steady, even growing slightly, employing around 14,000 people, but non-financial services, after years of high growth, are beginning to show a decline, maybe by 1,000 or so to around 55,000.

Wholesale (not including automotive), having grown strongly to 2019 has dropped around 5,000 or so jobs in the past couple of years, employing around 38,000 people. This could be reflection of the change in structure of Japanese wholesalers in Europe, who have moved their EU logistics and warehousing to the continent. There are also another 1,000 or so jobs likely to be lost in non-automotive manufacturing sectors.

We have not been able to publish a final Top 30 UK for 2020/2021 of the largest Japanese corporate groups, as there are still outstanding annual reports due to be filed at Companies House for NTT and NEC. Taking both of those groups out, it seems the biggest employers are cutting back, deliberately or through passivity, on their employee numbers in the UK. The decline represents around 5,000 jobs, 5% of the 97,000 who were employed by the big corporate groups in 2019/20, and it seems likely the total will fall further in 2021/2022. This is not just because of the Honda Swindon closure feeding through, but also from factoring in the 700 or so fewer staff at SoftBank-owned ARM, down from the 3,700 peak a year or so ago, when it fulfilled its 2016 promise to double its workforce in the UK.

The key question, particularly for Brexit watchers, is whether this decline in employment by Japanese companies in the UK is also occurring in the rest of the region. The Top 30 Japanese companies in Europe, Middle East and Africa employed around 577,000 people as of the annual reports for the year ending 2022. The data for Yazaki is yet to come in, but for the remaining 29 companies (which includes Honda), there was a 2% increase in employees in the region. Without the loss of 4,500 jobs at Honda UK companies, this would have been a 3% increase. So while EMEA has seen gradual growth in numbers employed by Japanese companies in the past couple of years, the UK has seen an accelerated decline.