UK is the only top 10 European economy where the number of Japanese residents has fallen – why? 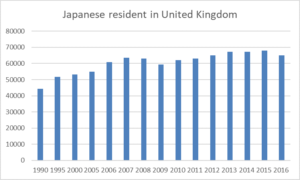 The UK is the only top 10 European economy where the number of Japanese residents has declined from 2015 to 2016.

The number of Japanese residents in the UK hit an all time high in 2015 of just under 68,000, according to Japan’s Ministry of Foreign Affairs. This fell by 4.5% in 2016. The last time there was a significant fall in Japanese residents in the UK was 2007-9.  Presumably this can be attributed to the Lehman Shock, and numbers have been climbing steadily since 2010.  So why has there been another drop?  Brexit might be the easy answer, but the referendum vote was in June 2016, so it seems a rather immediate impact.

There are more Japanese in the UK than anywhere else in Europe, both in absolute and relative terms. The second highest population of Japanese in Europe is in Germany (44,027) and the third highest is France (41,641), with other countries having substantially less Japanese presence (4th is Italy, with 13,808).

I was surprised there were that many Japanese people in France as there are fewer large Japanese companies and regional headquarters in France relative to Germany or the UK. Fortunately, the Ministry of Foreign Affairs breaks down the total by whether they are permanent residents or long term residents – broken down by intra company transfers, self-employed and students/academic related.

As you can see from the graphic, France has a relatively larger proportion of students, self employed and government related people, whereas the UK has relatively more permanent residents and Germany relatively more intra company transferees.

Number of permanent Japanese residents in the UK has risen, but academic, corporate and diplomatic residents have fallen

Comparing the UK to trends in Germany and France shows that Japanese are still studying in Europe, just increasingly more in Germany or France (also large Japanese student populations in Italy, Spain and Switzerland and significant increases in the Netherlands and Ireland).  Diplomats and other government officials are also gravitating more towards Germany and France (there are also a large number of Japanese government people in Switzerland).

Germany hosts almost double the number of Japanese companies than the UK does (1811 compared to 998) so the other key difference between Germany and the UK is the density of Japanese people on intra company transfers per Japanese company.  The UK has by far the highest density – of around 18 Japanese residents per company, then Belgium with 12, then France with 11, Germany, Netherlands and UAE with 9.  This is due to the large number of regional headquartered financial services and trading companies in London.

So what has changed since 2015 that has not impacted the other European countries so much, apart from Brexit?  I conclude it must be the increasing difficulty of obtaining Tier 2 intra company transfer visas (as I mentioned in my comments to the Financial Times recently) and also student visas (as explained in this 2016 report).  Government agency/diplomatic visas are dealt with separately I assume – maybe this is an element which can be explained by the UK’s declining international influence and more a question of reduced demand rather than reduced supply?  Either way, Brexit and visa restrictions will be a combination precipitating further rebalancing away from the UK and to the continent, I predict.