Are there 10% or 1% fewer Japanese companies in the UK than five years’ ago? And why?

The Ministry of Foreign Affairs only breaks down its figures by organisational type and sector, but this does provide further clues. The biggest absolute decrease in numbers is amongst those categorized as a subsidiary incorporated in the UK. There were 480 such companies in the UK in 2014 – this fell 16% to 404 in 2019. Conversely branches of local subsidiaries rose 31% from 179 to 226. This seems to indicate that a fair number of UK incorporated subsidiaries unincorporated and became branches over this period, particularly over 2018-9.  This tallies with what we have observed empirically – most famously with Sony Europe and Panasonic Europe becoming branches of EU subsidiaries but also a dozen or so others such as Takeda, Shionogi, Sanden, Fujitsu General, Murata and Alps becoming EU branches.

It looks like Brexit also provided an excuse to do a bit of tidying up, – consolidating multiple subsidiaries into one, for example. The Ministry of Foreign Affairs data also include companies established by a Japanese national with over 10% share in equity in its figures. This number has shrunk by 68 since 2014 to 96. We suspect this may be in part to do with those Japanese nationals becoming permanent residents in the UK or British citizens (other MoFA figures show this group has grown considerably) and therefore no longer included.

Breaking the number down by sector also provides some insights. Japanese companies in the UK who are manufacturers are the biggest group, despite the UK’s heavily services oriented economy.  Their numbers have dropped 22% from 2014 to 2019, from 417 to 326. Conversely, the number in the wholesale and retail sector has increased 44% from 112 to 161. The changes in the two sectors may be related, as Oki, Sony DADC, Tamura, Keihin, Nicera, Zeon Chemicals and Maruwa stopped production in the UK during this period but remained as wholesalers in the UK. Financial services companies, traditionally a UK strength,  fell by a third from from 114 to 75, which is surprising considering they were active pre-Brexit in acquisitions, but perhaps again reflects some Brexit-related consolidation and divestment. Closures we are aware of include MC Asset Management, Speedloan Finance, Okasan Securities, Nomura Alternative Investment Management, Sumitomo Mitsui Asset Management. 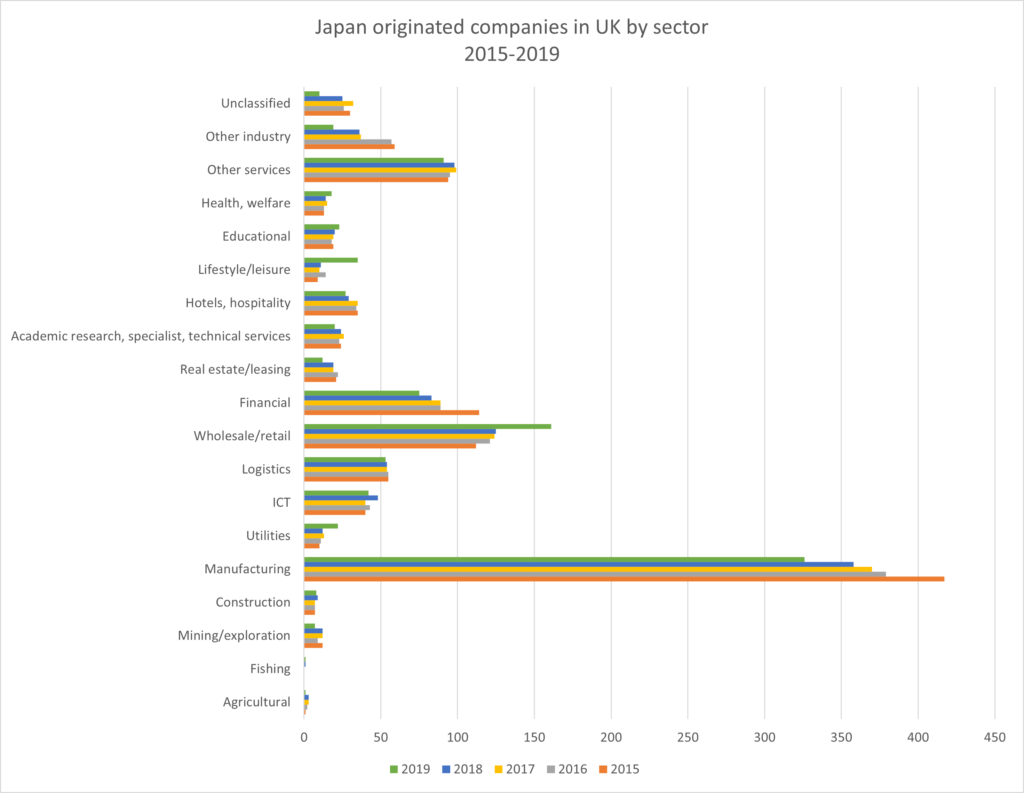 The sectors where there have been significant jumps in investors show where Japanese corporate interest in the UK now is. The number of Japanese utilities companies investing in the UK rose 120% from 10 to 22 and in the lifestyle and leisure sector by 289% from 9 to 35 – some new entrants we have been aware of the past couple of years in these two categories have been Hakutsuru Sake, MTG, Asahi Premium Brands, JERA Power, Nippon LP Resources, DTM Renewables and Sojitz Energy. The majority of “new” Japanese companies in the UK over the past five years were the result of acquisitions.

If you would like to know the top 30 largest Japanese employers in the UK, you can download our pdf for free: